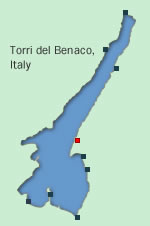 Torri is a small and relatively quiet lakeside village to the north of its larger and bustling neighbours Garda and Bardolino. It stretches north and south along the Gardesana Orientale road on the eastern edge of the lake, but the picturesque area around the harbour and historic castle is the heart of the settlement.

The village name Torri del Benaco ("towers of Benacus") refers to the three towers and the fortifications built here and to the old Roman name for Lake Garda. The Romans constructed the first strongpoint here, but the impressive castle walls were built centuries later. 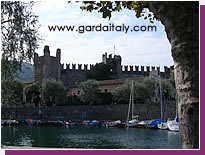 Scaliger Castle
The fortifications here are far from the first in this position on the eastern lake shore. After the Roman strongpoint was built in the first century BC, the next major effort at defensive work was carried out by Berengar I in the 10th century to protect his lands from the Hungarian invaders. The Scaliger castle was built in the 14th century - the Scaligeri were the ruling family in Verona at the time. Unfortunately, not long after its completion it was attacked and taken by the Viscontis, a rival Milanese family. The castle currently houses an ethnographic museum and a historic limonaia (a protected area for growing lemons).

After the fall of the Scaligeri, the area was controlled by Venice and the commerce on the eastern side of the lake was operated by a council of the lake settlements under Venetian rule. The meetings took place in the dining room of the Hotel Gardesana - the arches and shaded lake walk are a clue to the former importance of the merchants' palace. 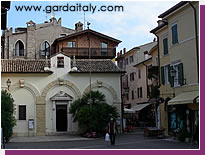 Oratorio
The Oratorio della Santissima Trinità was once the chapel of the council mentioned above, although there is evidence that there was a religious building here from the fourth century onwards. Frescos from the 15th and 16th centuries are housed in the chapel. The town council carried out extensive restoration work both on the structure (to stop damp damaging the images) and finally on the frescoes themselves in the run-up to the Millenium.

Torri was the site of a naval engagement between the Austrians and French during the Napoleonic era and became part of Italy in 1866. The population has grown steadily since them and is now estimated to be over 3000.

Although Torri del Benaco is not one of the biggest village resorts on the lake, it has a good range of hotel and apartment accommodation. More information:

Increasingly, visitors are making their own way to the villages on Lake Garda, especially those on the eastern shore. For a map and some advice about the best ways via car or plane try our Garda area travel page:

We hope you find this website useful and look forward to hearing your comments about the site and the destination. We especially welcome any views about the resort from those who have stayed there. 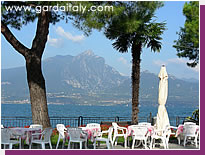