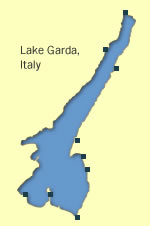 Things to Do on Lake Garda

Lake Garda is one of the favourite sporting destinations in northern Italy - to a large degree, because of the range of activities on offer. Four of them are picked out below, but there are also paragliding, horseriding, sailing and plenty of other options on offer - equipment and instruction is available from centres, outfitters and rental shops on the lake. 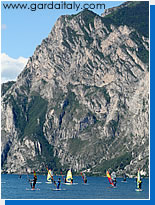 The north of Lake Garda is a windsurfing mecca, with the resorts of Riva - and especially the neighbouring village of Torbole - extremely popular holiday destinations for windsurfers from all over Europe.

The day is marked by two distinct wind patterns - a colder wind coming out of the mountains to the north (the "peler") in the early morning and a warmer wind which blows from the south in the afternoon (the "ora"). These are created by the rising hot air and sinking cold air in the mountains at various points of the day and night. The "peler" can be quite a strong wind, producing waves suitable for skilled riders.

Kitesurfing is also growing in popularity and tends to be centred a little bit further south in the resorts of Malcesine and Brenzone on the eastern side of Lake Garda. Kitesurfing is restricted in some areas of the southern lake. 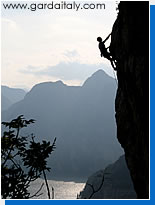 The best-known Lake Garda climbing is that at Arco. The village lies just to the north of Riva del Garda and is the location for the well-known RockMasters sport climbing competition.

Although Arco has a reputation as a centre for sport climbing, it can also boast some big walls with natural protection in the area. There are various areas around the valley heading up to the north and also to the south near the village of Torbole closer to the lake. This whole Arco climbing region has its own guidebook ("Arco Rock") which is in English and available in the area. It should be noted that south-facing climbs get extremely hot in high season.

The village of Marciaga near Garda on the south-eastern shore of the lake also has quite a number of good cliff climbs. 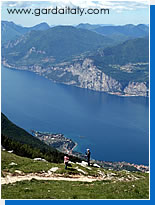 As a classic "lakes and mountains" destination, Lake Garda has a fabulous range of walking available - whether it's a stroll from village to village amongst the vineyards or a strenuous hike up over one of the peaks which tower above the northern part of the lake.

As well as the stunning views down onto the lake from peaks like the ever popular Monte Baldo (with cable car access from Malcesine for those who don't fancy the climb), there are also interesting routes to interesting locations (such as WW1 tunnels and fortifications or historic monasteries and churches).

Looking for some of the best-rated hotels on Lake Garda?
Check accommodation rated 'superb' or 'exceptional' by visitors who used hotel reservation website Booking.com. No reservation fees.
Check availability 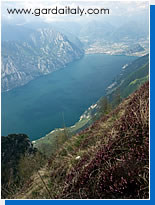 Lake Garda has been called one of the best mountain biking locations in Europe. There are good networks of mountain biking trails all around the lake, with maybe only the southern coast not being as suited to the sport. However, even there the small hills and farming areas will be enjoyable for those looking for an easier day. To either the east or west, or up at the north, there is more than enough choice at all grades of difficulty.

In the summer there is a special Bike & Bus service for bikes to certain locations, such as Monte Baldo, allowing a good downhill run without the climbing.

Possibly the only negatives are the heat and the fact that the area is so good you are unlikely to have the trails to yourself.